Sooooo, we're sitting having dinner and as per usual The Dude decides to cut right to the chase and ask one of his "no beating about the bush" questions. 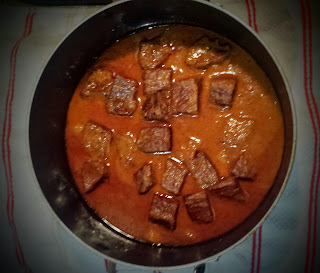 Big Daddy ponders carefully and then replies, "no, not always but I am glad I am a Dad, especially yours and La-la's."

The Dude considers this response.

"Dad," he says, "when you decided to become a Dad, did you think you'd become such an awesome Dad?"

The Dude fixes his eyes on his dinner and indulges in a bit of pondering himself. This is followed by a sigh as he announces, "I don't think I'll become a Dad, I don't think I'd be very good at it."

This astounds me, as this is pretty much the reason why I am a geriatric mother - for most of my life I thought the whole mammy scene wasn't for me. I believed I wasn't cut out for the demands of motherhood. Children were like foreign objects to me - strange creatures in constant need of attention and care that didn't seem to obey the laws of anything - merchants of chaos! And I felt I didn't have the necessary talents to deal with such creatures, so the world would be better off if I left the mammy box unticked. 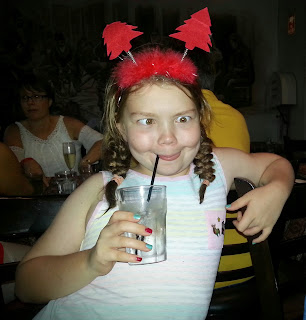 
Thankfully I had my road to Damascus conversion once I became an aunty and I figured maybe I could handle this mammy gig after all. Luckily I hadn't left it too late. Nearly but not quite...

So here I am sitting opposite my son who has the same ideas about becoming a Dad as I had about becoming a mum and I don't want him to go through life with that idea in his head. I want him to feel that he has as much potential to become a Dad, and a pretty awesome Dad, as the next boy. I don't want him plagued by the same silly feelings of inadequacy as I was for most of my life.

I sit bolt upright in my chair and announce, "hey, don't feel like that! I never thought I'd become a mum and I thought If I did then I'd be crap at it but you know what, I am a mum and I'm a pretty fucking awesome mum!"

There followed that enormous silence when someone has said something completely incongruous and then everybody around the table exploded into laughter.

The Dude's eyes were out on sticks.

"Mum!" he exclaimed, "you swore! I'm not sure that makes you awesome."

The Dude & His Eyes!


La-la was laughing so hard at this stage, she had tears in her eyes.

Big Daddy was shaking his head.

I was sitting there thinking how over forty years worth of self-doubt had just been obliterated in that one comment and it felt good! I looked at my two children laughing their heads off, their beautiful faces the picture of happiness and I said to myself, "yeah, I'm a pretty fucking awesome mammy!" 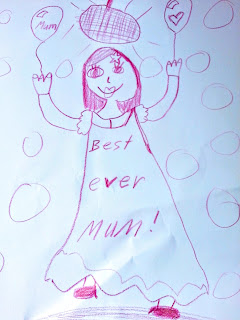 As La-la sees me!
All singing, all dancing Mum!
Posted by Unknown at 07:45 No comments:

It was just myself and the kids the other night sitting down to dinner and having a chat about how their day went when La-la dropped the bomb on me! It went like this...

La-la: "I'm not really sure what sex is but I've a funny feeing there's more to this business than I think there is."

The Dude: "Oh don't worry - I know all about it! Just ask me what you need to know and I'll tell you."

La-la shoots him a doubtful look and then looks at me. (I was sooooo hoping she wouldn't look at me. I was quite happy for the Dude to handle this one!)

La-la: "Mum, I'm not sure if I really want to know but what the hell is sex and have you done it with Daddy?"

The Dude swings his head around in my direction, his eyes huge with curiosity as he pops a piece of sausage into his mouth and proceeds to chew it slowly just as I suspect he is chewing over La-la's question in his mind, especially the last part.

I feel like the proverbial rabbit caught in the headlights.

This is where the Dude bursts into the conversation with his specialist knowledge. He simply can't hold back from contributing any longer!

"Yes!" he announces, "it always happens at night!"

La-la scowls at him.

"I think you might be wrong there Buddy," she informs him, "I'm telling you, there's more to it than what we know and I'm not even sure I wanna know!"

"How is everybody's dinner?" I ask, "carrots okay for you both?"

"I think boys' willies have something to do with it," La-la announces.

"Nooooo," the Dude informs her, "how the hell would they come into it!"

"I don't know," admits La-la, "but a boy at school said to me today that if I wanted to have sex with his friend then all I had to do was poke his willy!"

She then stopped eating such was her disgust at the prospect.

The Dude looked at me, horrified!

I'm sitting there thinking right about now would be a good time for something to go on fire in the kitchen.

"What?" I ask in return, desperately playing for time.

"Erm... technically they do..." I answer and watch as La-la's face scrunches in disgust.

The Dude's face is a study in surprise.

Tell him more! Is he kidding me! I've already had quite enough of this surprise conversation! I decide to turn the tables and try and get this discussion to head towards the exit.

"Never mind me telling you more," I say, "why don't you tell me where you got all your info on sex."

He pops another piece of sausage into his mouth and I could never have guessed what he came out with next.

I positively choke on my chicken!

"Batman!" I declare, "Batman told you all you know about sex?"

He looks at me as if I've lost my mind and shouldn't it have been obvious to me that Batman would have been his source.

"Yeah," he says, his voice dripping with, "of course!"


I ask him to tell me more.

"Batman is always having sex, especially in the Dark Knight!" he announces, somewhat emphatically.

I frantically run scenes from the movie through my head and breathe a bit more easily when I realise he is referring to the scene where sex is suggested not actually depicted! But it's obvious both characters are naked. The Dude has obviously drawn his own conclusions.

At this point I'm fighting an uncontrollable urge to giggle. La-la spots my smirk.

"What's so funny?" she asks, "this is a disgusting conversation and I'm kinda sorry I brought it up. Ugh! I can't believe I'm talking about boys' willies and eating my dinner at the same time. And mum, please tell me that sex is for adults only. I don't know why that guy said that to me today."

This wipes the smirk off my face. I don't know why he said it either but if I catch a hold of him he won't be saying anything like it to her again.

I look at my beautiful daughter who is as innocent as a ten year old girl should be. I look at her and I'm sad we live in a world where she is exposed to such a comment from a boy who is the same age as her. But this is the world we live in, a world where childhood is under constant assault and innocence is increasingly under threat.

I look at her and it's clear this comment has troubled her. I don't want her to be bothered by it for another second. I smile.

She's visibly relieved and resumes eating her dinner. That is until the Dude adds his tuppence worth.

"Yes," he announces, "and when you're eighteen you can have lots and lots of sex, just like Batman!"

With that I set fire to the kitchen! Not really but I sure put a fire under my kids to finish their dinner so I could get them to bed. I was done with talking!
Posted by Unknown at 22:33 No comments:

Seek And You Shall Find!

It was free dress day today at the school which meant the kids got to wear anything they wanted and not their uniforms.


"I want to wear my Super tee-shirt and my blue shorts with the white stripe down the side," the Dude announced at approximately thirteen minutes past eight.


The Super tee-shirt was lying proudly on my bed and I felt somewhat smug at being one step ahead of the Dude. My smugness was short-lived though as I realised I had no clue as to where the shorts might be. I spent the next five minutes trying to convince the Dude to wear his Avengers tee-shirt and a cool, camouflage type pair of shorts. I thought I had succeeded and congratulated myself on my powers of persuasion as we made our way upstairs for what I hoped was going to be a quick breakfast. I was just putting the finishing touches to the lunches when I noticed the Dude sneaking, ninja-like, down the stairs.

"Where are you going?" I enquired, "and what are you doing?"

"Nothing!" came the reply.

"Will I come and help you?" I asked, which was code for - "you'd better not be down there looking for those damned shorts with the stripe at 8:20 am when you haven't even had breakfast yet!"

The Dude understood my code perfectly.

"Nooooo!" he commmanded, "you do NOT come down the stairs."

I went down the stairs.

I found him him in the laundry.

"What are you doing?" I asked.

"I told you not to come down here!" he announced.

"I'm looking for the shorts," he admitted, the frustration at his interfering mother oozing from every pore.
I looked at him and I looked at the Everest-like pile of laundry and I looked back at him again.

"Really?" I asked, "you really want to tackle that."

"Not really," he snorted, "but what choice do I have? They have to be in there somewhere!"

I should state here that our laundry room is known as the room of no return, as in, items of clothing go in there and never come back out. It's actually possible a small child went in there once on a playdate and is still in there...


I fixed my steely gaze on the Dude and announced, "you do realise it's nearly twenty-five minutes past eight?"

"Is that a rhetorical question?" he sneered.

I turned on my heel.

"Be upstairs in two minutes, " I warned him, "do NOT make me come and get you."

Approximately two minutes later a very smug eight year old boy waltzed past me sporting the biggest, dirtiest grin you've ever seen. Thirty seconds later he presented himself to me in the kitchen, "ta-dah!" he announced and flung his hands in the air before twirling and walking off.

I was gobsmacked! As long as I live, I will never know how he found those shorts in under two minutes.