Dogs.  I adore them. Always have and always will.  To me, dogs are angels that walk on this planet with us and accompany us on various parts of our journey through life.  Guardians, comforters, companions and endless sources of joy.  If there is one thing I can depend on in this world it is the total, absolute and unconditional love of my dog.

A number of years ago as I was setting out for a new life in Hong Kong, a friend commented that I'd better keep a close eye on my dog because "dogs end up in pots" over there she said - half joking, half serious.  I dismissed her words as a joke at the time, thoroughly believing the dog-eating stories of Asia to be exaggerated tales of a practice that was dying out and still only to be found in the more remote regions.  Sadly, how wrong was I?
Social media has been a hotbed of stories in recent months regarding the dog-eating trade in Asia and attention has focused in particular on the upcoming Dog-meat "festival" in Yulin, China.  I think to call what takes place in Yulin a "festival" is a gross misuse of a word which implies something is being celebrated.  The torture and barbaric slaughter of thousands of dogs is most certainly not a celebration but a blight upon the world and an event that deserves all the international condemnation it has received in recent months.
Those who defend it do so in the name of culture and "way of life" as if this means it is somehow excusable and shouldn't be questioned.  Whereas the local authorities have officially banned the event it is still expected to go ahead as the ban doesn't seem to extend to actually taking action to prevent the slaughter and is more of a saving face exercise than anything else. Meanwhile, the ruling proletariat in Beijing are content to sit back and do nothing.  Well that is simply not acceptable.  If customs, superstitions and the "way of life" argument were acceptable arguments for doing nothing then we'd still have gladiators fighting each other to the death, witches burning at the stake and kings, queens and emperors ruling empires.  The Chinese authorities have shown themselves well capable of tackling cruel practices before, such as foot binding, now completely eradicated throughout China but a common practice till very recently.  This was even more embedded in the Chinese psyche than dog-meat and is now gone as a result of the Communist Party banning it as a consequence of many campaigns by conscious objectors both inside and outside of China. 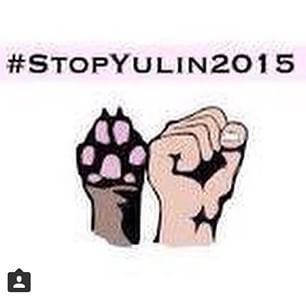 Thankfully, there are a growing number of animal welfare activists in China who are trying to to do something about the Yulin situation and the dog-meat trade in general.  It is thanks to them and their use of social media that the rest of the world is aware of what is going on. We can't stand with them in Yulin to physically rescue these unfortunate animals from their terrible fate but we can stand with them on facebook, twitter, and every social media site available to us and let them know we support them and their efforts.  Share the hashtag  #StopYuLin2015‬  and do one small thing for the animal we all know as man's best friend.
Posted by Unknown at 09:05 No comments:

Well the Queen's birthday saw me and my family enjoying the mid-morning sunshine out on the deck and the conversation turned to superheroes, as it inevitably does when the Dude is involved.  This morning he wanted each of us to tell him, if we could be a superhero then which superhero would we be.  The fact that he was asking was merely a formality as he had already decided who everyone should be.  La-la was Batgirl, Bid Daddy was Superman and I was......., well this is where the poor Dude hit a bit of a road-block.  You see if there is one thing all superheroes, either male or female, have in common, it's that they have rather impressive physiques and the ladies in particular are on the slender side.  The Dude looked most perplexed.

"Mummy," he said, "I don't know who you can be because there aren't any chubby superheroes."

I could tell by his face that this just would not fly.

"Nooooo," he protested, "that's not the way this works!  Mummies don't wear capes!"

So then I thought about it and thought how sad that there wasn't a superhero with at least a little bit of padding, I mean how handy would that be if you were a superhero?

Big Daddy tried to help out and searched for a curvy female superhero on google but the best he could come up with was The Vixen, who I might add has some pretty sensational curves going on but who was dismissed by the Dude as being "too sexy."

"Huh?" asked the Dude, whose face suggested he didn't quite like the sound of what he was hearing.

"Chubbygirl, she's a new superhero," I informed my lovely family, who were pretty much all catching flies with their mouths at this stage.

The Dude was unimpressed.

"Chubbygirl!" He exclaimed, "what the hell is her super-power?"

"Well," I started to explain, "she rolls herself up in a ball and launches herself at villains and goes really fast and knocks them out."

The Dude was impressed.

The Dude was liking the sound of Chubbygirl more and more.

"Something like this," he managed to squeeze out through snorts.

The Dude took the phone offered by Big D and looked on in horror.

It seems I can't win on the superhero front - I'm either too chubby or not chubby enough and I most certainly am not allowed to be sexy!

I took the phone and looked at what Big Daddy found so hilarious.

Big Bertha - who knew?  Looks like someone beat me to the "superhero with a bit of padding" idea. All I need now is for Big Bertha to show up and sort out the husband known as Big Daddy.
Posted by Unknown at 19:40 No comments: