Brisbane G20 - Welcome To The "Hippest City" In Australia

So it's all eyes on Brisbane this weekend as the leaders of the world's twenty most powerful nations descend on the city for their annual pow-wow.  Coming along with them are all the admin, support and security staff and of course no international backscratching event would be complete without the accompanying posse of media. 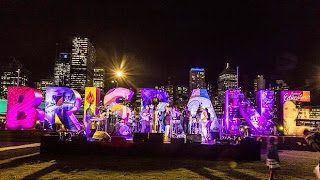 It's estimated that Brisbane can expect an influx of approximately 10,000 visitors over the next few days.  So, what will they find when they get here?  Lonely Planet recently named Brisbane "the hippest city" in Australia - no mean accolade.  Having lived here for the past two and a half years, I have to say I agree with them.  Brisbane is one cool town.  G20 attendees will find streets with jacaranda and bougainvillea in full bloom.  Having a sub-tropical climate the city is known for its al-fresco dining and it's pretty unbeatable when this takes place along the river such as at the Eagle Street precinct.  When it comes to after-hours entertainment much of the action is to be found in The Valley - home to some pretty cool bars and music venues.

The Brisbane river is the life-blood of the city and affords the visitor one of the most effective and fabulous ways to see Brisbane and to connect up with its many diverse neighbourhoods.  One of my favourite things to do is hop on the Citycat (the highspeed catamarans that go up and down the river day and night) and let the wind tug at my face as we zip from stop to stop, looking at all the amazing riverside properties.

﻿
One of my favourite places to head to on the Citycat is the Southbank area with its city beaches.  Yes you read that correctly - beaches in the middle of the city.  Originally developed as part of  Expo '88 the area has since been re-developed and improved and provides an amazing place to meet, chill and relax in the heart of the city.


With Temperatures set to soar to 40+ degrees over the weekend - that's 105 Fahrenheit! - I'd be willing to bet you might find a few delegates cooling off at Street's Beach.  This is one of the things I'm not crazy about Brisbane - the extreme temperatures in summer.  Last summer saw some of the highest temperatures ever recorded in Australia and it looks like this year isn't going to be any different.

If there is one things the G20 delegates won't find in Brisbane this weekend however, it's a Brisbanite.  The past few months have seen a heavy emphasis on security and traffic restrictions with road closures.  The city centre is on lock-down and the locals have been given the distinct impression to stay outta town!


We even have the day off!  Which means only one thing to a Brisbanite - the chance to get to their beloved beaches on either the Sunshine or the Gold Coasts - which offer an embarrassment of riches when it comes to golden sands.  All roads led out of Brisbane last night and this morning.

And they were chocca - as my Aussie friends would say.  Brisbane city centre is effectively a ghost town.  Realising they may have gone overboard and empty streets aren't exactly the image they want to portray, city officials have recently announced the availability of 1000 free car parking spaces over the weekend.  In a city where it costs $30 per hour for parking - this is rather generous of them.

That's one thing all the delegates will find in Brisbane - shocking prices for food, drink and taxis.  Then again hip and cool was never cheap.